A concerned reader writes to the science section of the New York Times to ask: “Am I still getting vitamin D when I’m outside on a gray, cloudy day?” The answer from the Times explains that your skin needs exposure to ultraviolet-B rays in order to synthesize vitamin D. Unfortunately, this is the same ultraviolet-B that causes sunburn and skin damage. Finding the optimal exposure time is complicated, especially when the amount of UV-B energy is affected by factors such as cloud cover and latitude.

To strike a balance between useful exposure and protection, the N.I.H. recommends an initial exposure of 10 to 15 minutes, followed by application of a sunscreen with an S.P.F. of at least 15. The institutes say this much exposure, at least two times a week, is usually sufficient to provide adequate vitamin D, though some researchers suggest it may not be enough. At the earth’s northern latitudes for much of the year, and at the midlatitudes in winter, the sun does not stay far enough above the horizon (45 degrees) for the angle of the sun’s rays to guarantee an efficient ultraviolet-B bath.

So even if you follow the NIH recommendations to the letter, the resulting UV-B exposure still may be too little or too much? Sorry, but I’m not going to waste my time on a process as inconvenient and unreliable as this.

Fortunately, I don’t have to. Vitamin D is available in pill form in any grocery store. Yes, your skin can synthesize it, but it doesn’t have to. The pills are inexpensive and convenient; why not use them? You get exactly the right dosage every time (regardless of cloud cover or latitude) and there’s no risk of sunburn or skin damage.

There are plenty of good reasons to go outside and let the sun shine on you, but nobody should feel obligated to do so in order to get enough vitamin D. It simply isn’t necessary.

Perhaps I’m missing something, but the following strikes me as a profoundly stupid question:

Why do women long outlive their fertility?

Human ovaries tend to shut down by age 50 or even younger, yet women commonly live on healthily for decades. This flies in the face of evolutionary theory that losing fertility should be the end of the line, because once breeding stops, evolution can no longer select for genes that promote survival.

Women don’t outlive their fertility in their natural environment. The life expectancy of primitive humans averages between 20 and 35 years. And the women fare worse than the men, because a quarter of them die in childbirth.

We non-primitive humans live a great deal longer because of modern medical care, the entire purpose of which is to interfere with natural selection. Nature has plenty of mechanisms for eliminating women from the world long before they reach menopause, but we do everything in our power to prevent those mechanisms from operating.

Saying that this “flies in the face of evolutionary theory” is an indication of staggering cluelessness. Evolutionary theory describes how evolution works in a natural setting. Of course it fails when you try to apply it to a technological society with advanced medical care. Next you’ll be telling me that space travel flies in the face of gravitational theory because space probes go up instead of down.

Women live long enough for their reproductive systems to shut down for the same reason that both men and women live long enough for our teeth to start crumbling and have to be repaired or replaced. In our original environment (the savannahs of Africa), human bodies only had to last for 20 to 35 years. Beyond that point, it didn’t matter what systems might fail; we were never going to live that long anyway.

But now we’ve changed the rules. We routinely keep our bodies running for three or four times as long as they were originally designed to operate. Of course some parts stop working! It is unnatural for humans to live as long as we do. We are interfering with human evolution on a massive scale.

What really baffles me is that the people asking this stupid question are evolutionary biologists, and the article quoting them is in Scientific American. Why do expert scientists and science journalists have so much trouble seeing such an obvious explanation?

In the latest Dork Tower strip, the characters tackle one of the classic stupid questions: “Which came first, the chicken or the egg?”

Why do I call it a stupid question? Because it is. Fish, amphibians, and reptiles were laying eggs for millions of years before the first bird appeared on Earth. Obviously, the egg came before the chicken. I don’t understand why anyone thinks this question is remotely challenging.

Okay, actually, I do. Generally, when people treat this as an insoluble conundrum, their unspoken assumption is that “egg” really means “chicken egg”. So eggs laid by fish and reptiles are excluded. I see no reason to limit the question that way, but fine. Even if we accept that interpretation, answering the question is no problem. It becomes a simple matter of definition. Here’s how I would handle it:

It’s also available as a PowerPoint presentation — but this video of the author presenting it to the American Association for the Advancement of Science is, perhaps, more amusing.

UPDATE: Was Doug Zongker inspired by this children’s book? Or this comic strip?

I was pleased to read on the Cali Bamboo site that the problem of global warming has been solved:

It is believed that if bamboo were planted on a mass basis it could completely reverse the effects of global warming in just 6 years, and provide a renewable source of food, building material, and erosion prevention.

A couple of years ago, I wrote about a report that rats laugh ultrasonically when tickled. This New York Times article doesn’t really add any new information, but it includes a video that lets you see the rats’ behavior for yourself — and hear the ultrasonic chirps that, according to scientists, are laughter.
Source: Instapundit

Here’s an interesting math quiz. It’s short (only eight questions), but you have to solve them mentally: no pencil or paper, except to record your answers. I answered five of the eight questions correctly. I won’t go into detail until you’ve had a chance to try the quiz yourself. Click the link below to see where I went wrong.

END_OF_DOCUMENT_TOKEN_TO_BE_REPLACED

Large numbers are hard to comprehend. It helps to visualize them in terms of a familiar, everyday object, like a U.S. penny. That’s what the MegaPenny Project does. It starts with a single penny and shows you visual representations of increasingly large numbers of pennies. For example, how big is a hundred thousand pennies? (It’s about two cubic feet.) What does a billion pennies look like? How many would it take to fill up the Sears Tower? If you could collect all the pennies that actually exist, how large a stack would that make?
For each big number, the MegaPenny project not only shows you a picture, but also lists statistics like the monetary value, the total weight, the height (if you stacked them in a single column, one penny on another), and the area covered (if you laid the pennies out edge-to-edge). The site takes you all the way to one quintillion pennies (a cube about five miles on a side).

The big periodic table chart on the wall of your high school chemistry classroom was useful, but it wasn’t very pretty or interesting, was it? But anyone who’s heard Tom Lehrer’s song on the subject knows that the elements don’t have to be boring. And now there’s a cool and beautiful alternative to the drab old wall chart: 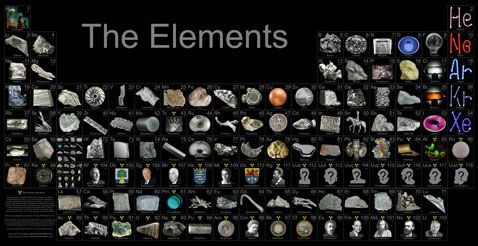 Theodore Gray spent years creating this poster. Now you can buy it.

Alana recently linked to a video of some lunatics at Case dropping fifty pounds of Silly Putty off a parking garage. Well, they’re not the only people who’ve been playing with large quantities of the stuff. A group of folks at Google all wanted big chunks of it, so they pooled their orders — and the guy who actually placed the bulk order ended up with 250 pounds of Silly Putty on his desk. Then the fun began . . .